⇒I just jumped on a plane to Luang Prabang, Laos from the small Chiang Mai Airport having only googled where I was going maybe three times. I had to leave Thailand for visa purposes, I knew I needed a vacation/break (haha) from courses and warm heart work, and I knew I would regret not going on an adventure to Laos. I was not expecting to fall in love with Luang Prabang.

Slower paced, less developed, and much smaller than Chiang Mai, Luang Prabang crept up on me when I walked into the center of the city and it took me 10 minutes to realize i was in the center of the city! Beautiful temples and French colonial architecture line both sides of the street. It is a 5 min walk across the peninsula (the city) to the bank of the Nam Khan or Mekong river, which converge at the tip watched over by a gilded temple.

We arrived at around 4pm, dropped our stuff at the hostel and set off for a backpacker bar/hangout right on the Mekong river that I’d looked up. I had no idea if it was going to look like the photos, things rarely do in Southeast Asia!, and I also wasn’t sure I was leading us down the right tiny backroads HA! 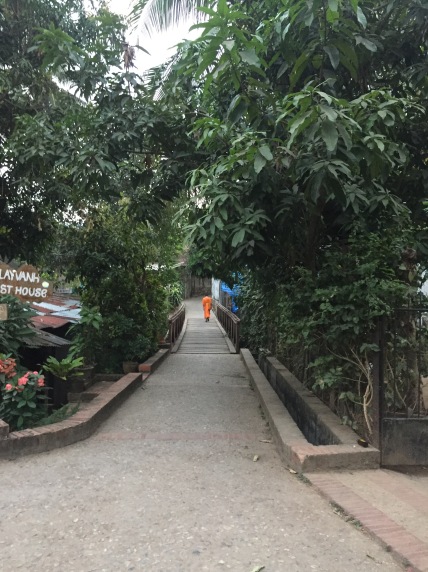 had to grab a pic of this pretty path and then the monk walked by. good timing! 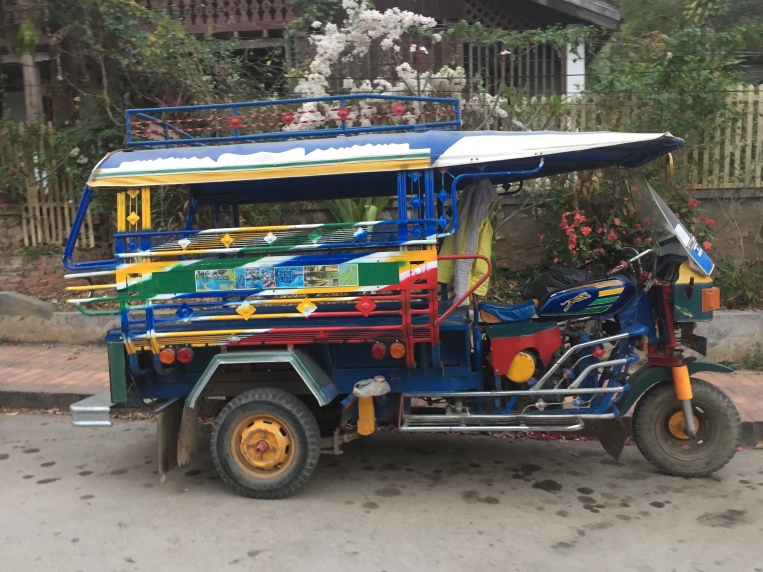 but low and behold it was exactly like the photos with the cushion laden balcony overlooking the sandy gorge that, in the wet season, was the epic Mekong river. We met our friend, Hanes, from germany who was traveling alone and who I had struck up a conversation with on the plane from Chiang Mai. He ended up joining the gang for the majority of the four days as did a hip Brazilian journalist traveling on her own as well. Fun making friends when traveling. 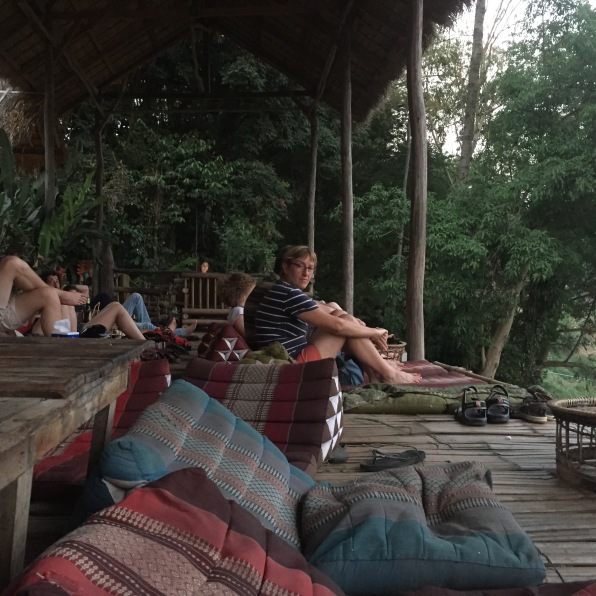 My two girlfriends and I stayed at the Downtown Backpackers hostel. which really was in the middle of the market. I woke up at 6:45 on our second day grabbed a cup of the nespresso and sat on the steps of the hostel watching as the market woke up right on the street in front of me. 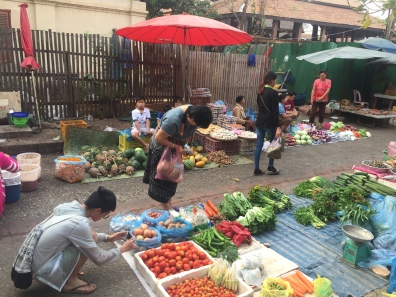 Everyone was laying out their tarps and setting up stalls as the early birds came to get their groceries before the stalls were organized properly and overrun by the rest of the town and the tourists.

The second day we climbed up to the temple on the hill in the middle of town. I thought of Ann Krumboltz and her love of adventure as I navigated the lying buddhas, potholes, peddlers selling tiny birds, and gold inlaid serpents to reach the “summit”. 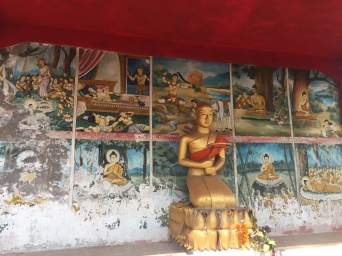 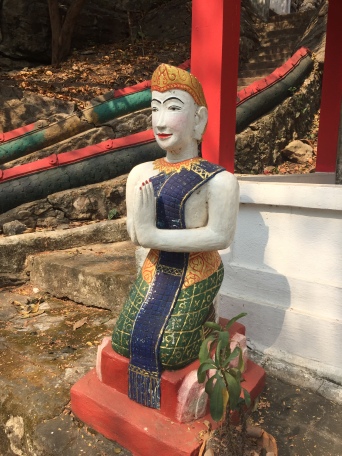 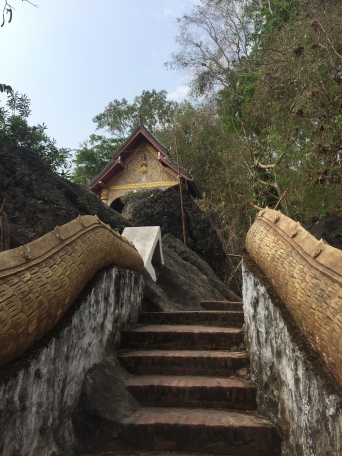 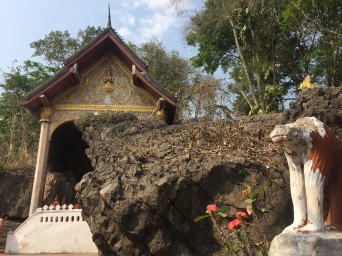 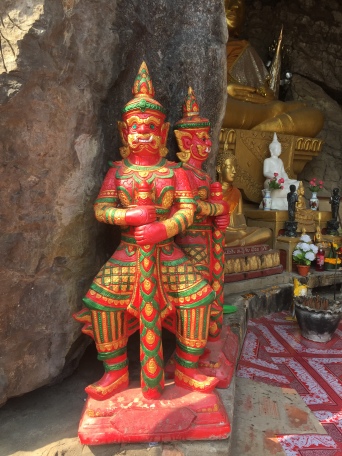 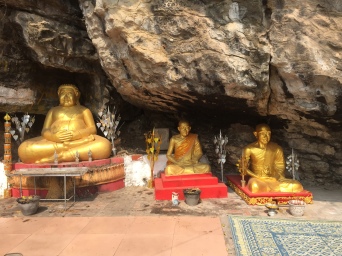 I loved how the temple was built in with the rocks the rocks hadn’t been moved but merely incorporated into the architecture. Very natural.

Here we are at the top. Ella is on the right and Sarah is in the center. These are the towo women I traveled with from Chiang Mai. They were great. 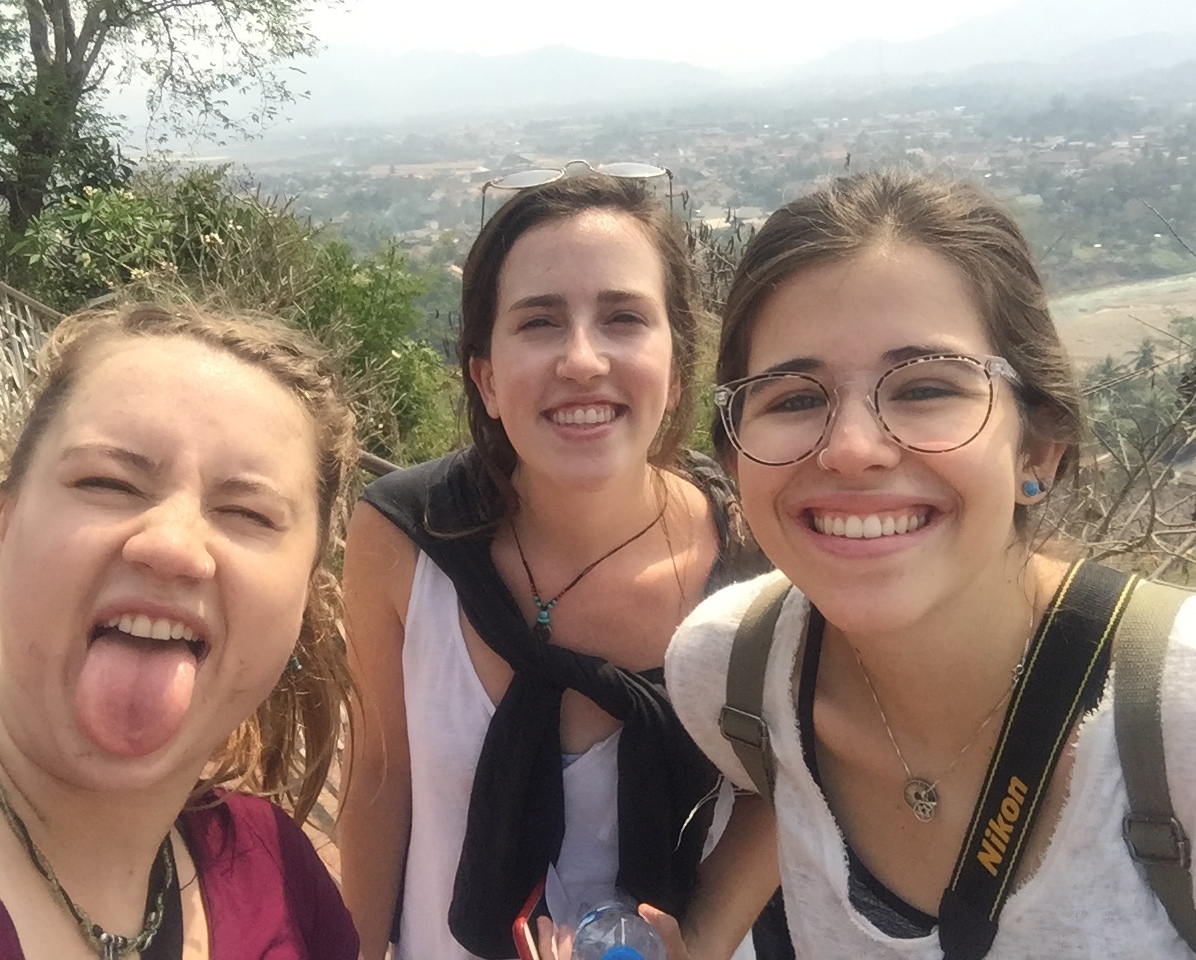 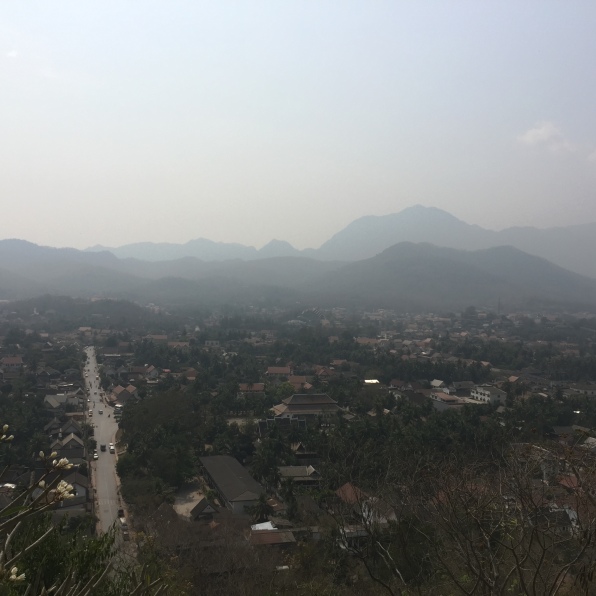 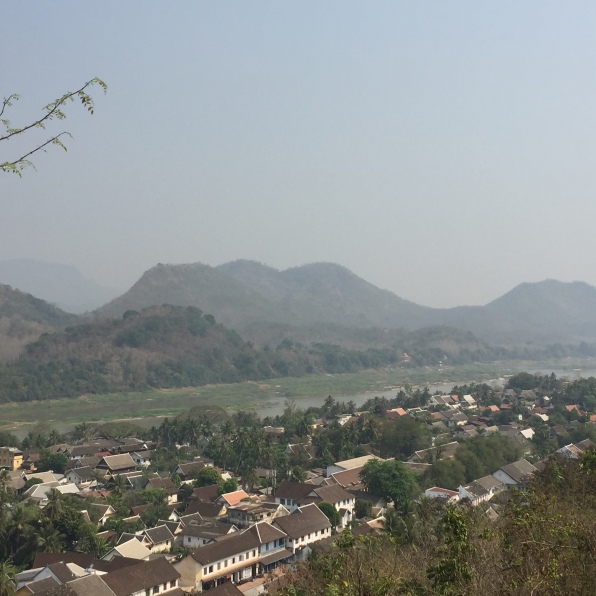 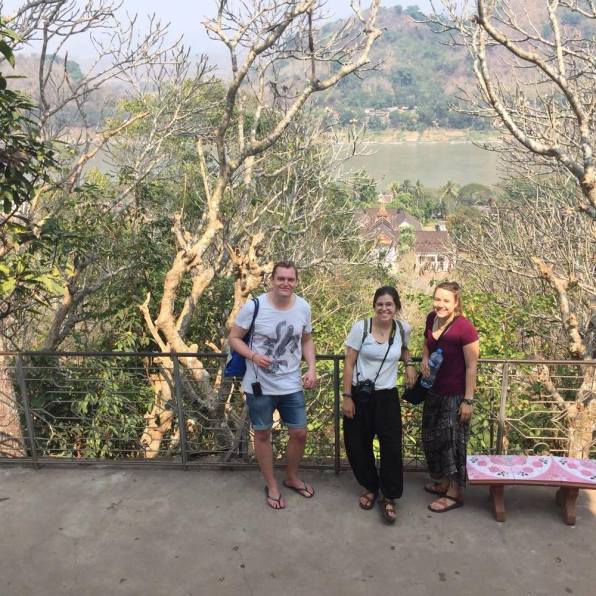 because it took me a few seconds to realize why when I peeked into the cave I saw an imprint of a wheel. Dang Liv! Duh! One of the 32 signs of the buddha is the imprint of a wheel on his foot. Gosh. My Buddhism professor will hopefully not be too disappointed I forgot briefly while I was at a temple. oops 🙂 I laughed pretty hard at myself so much so that I was hiccuping as I explained to my friends why this was so funny to me. They didn’t think it was that funny.Whatever. Buddha is laughing I hope.

We visited the Royal Museum next. 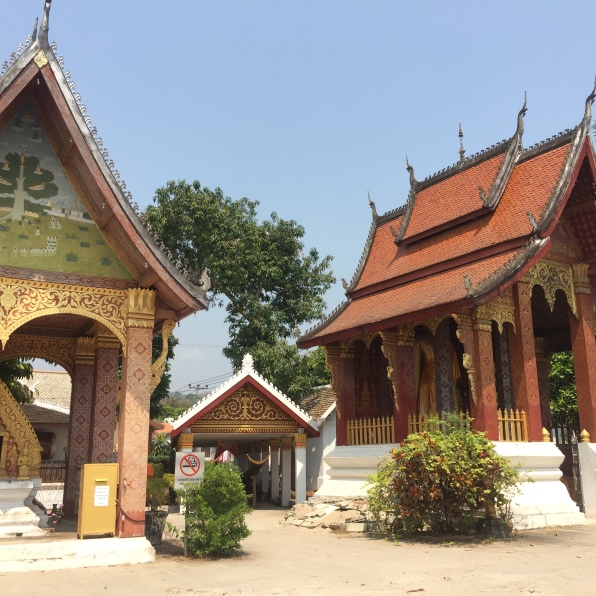 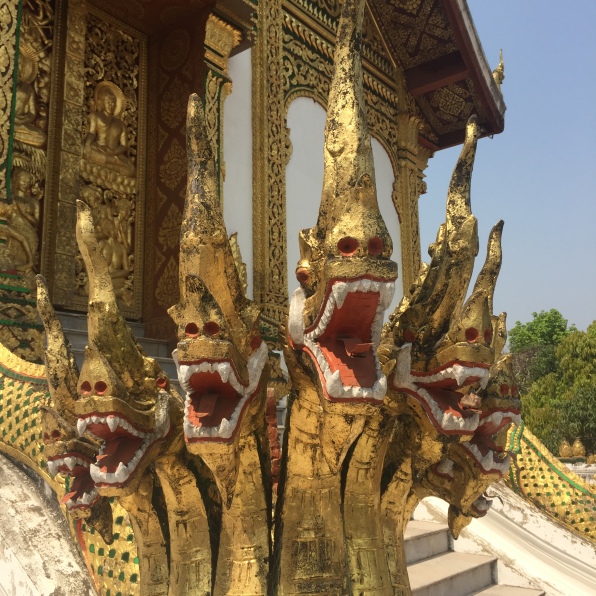 Gorgeous red mosaic ceilings telling many Hindu stories. There were displays of gifts given to the Laos royal family from many countries including Vietnam, Russia, Japan, the U.S.A, Myanmar, and Thailand. All of the gifts were beautiful vases, jewelry, carvings, and paintings except for the U.S’s gift which was a pen and a model spaceship. What the fuck! We weren’t allowed to take photos otherwise I would have shown the differences in what the U.S. valued enough to send the royals of Laos compared to their neighbors.

Then we rented bikes and rode around the peninsula visiting almost every temple we saw, which meant we stopped every few minutes. Fine by me:)

Sarah and I grabbed a great gin and tonic at a cute gallery on the rivers edge while trading stories from home and abroad. Reminded me of river cocktails and chats.

The next morning (Sunday) we went to the Koung Si Waterfall via tuk-tuk with Guilie, our Brazilian journalist friend. It was beautiful! I just expected a hike to waterfall but instead we swam in the incredibly blue pools below the water fall before heading to the main falls. 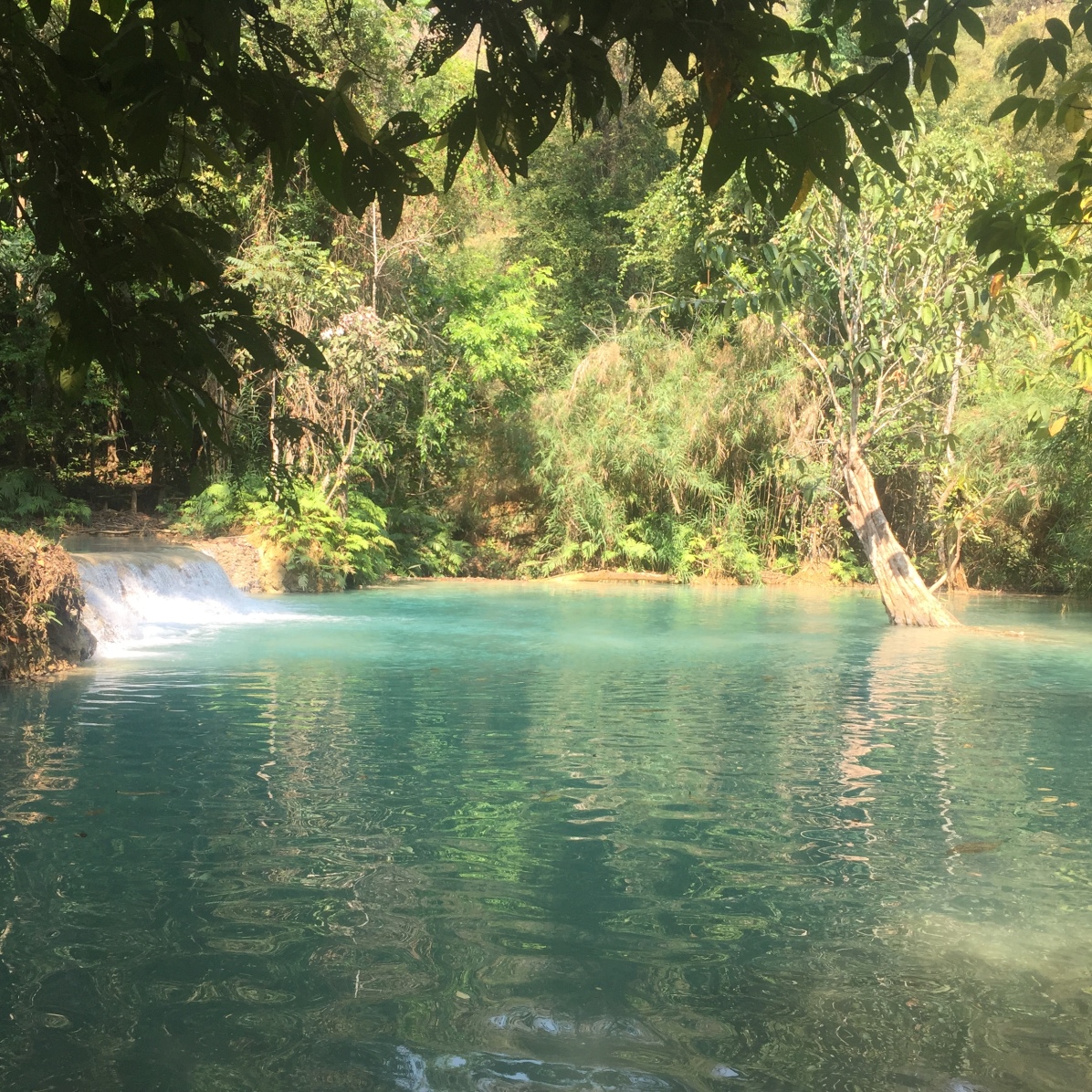 It reminded me of Semuc Champay in Guatemala. I swam and ducked under the mini waterfalls. Some selfies with Guilie’s Gopro were a necessity:) 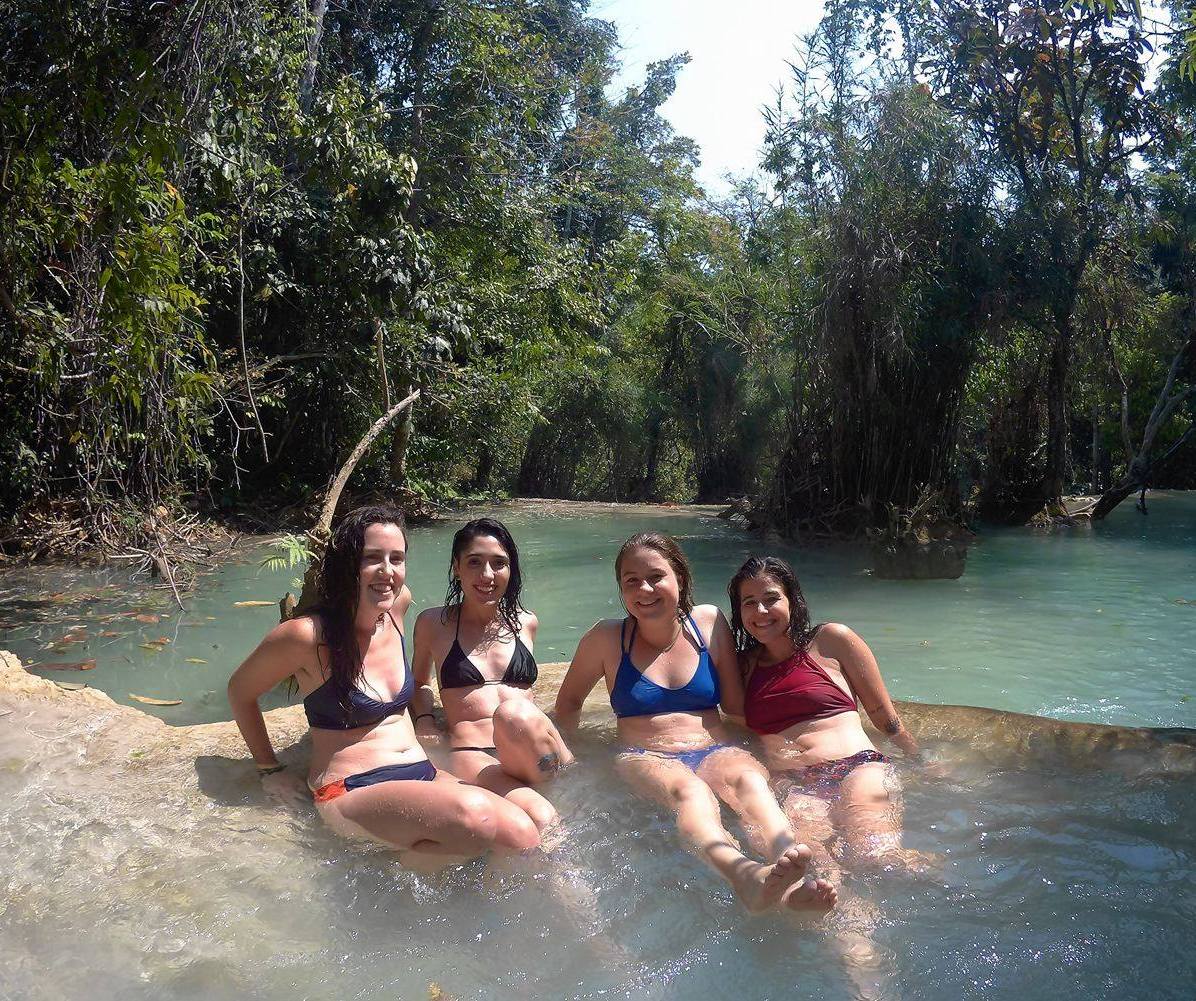 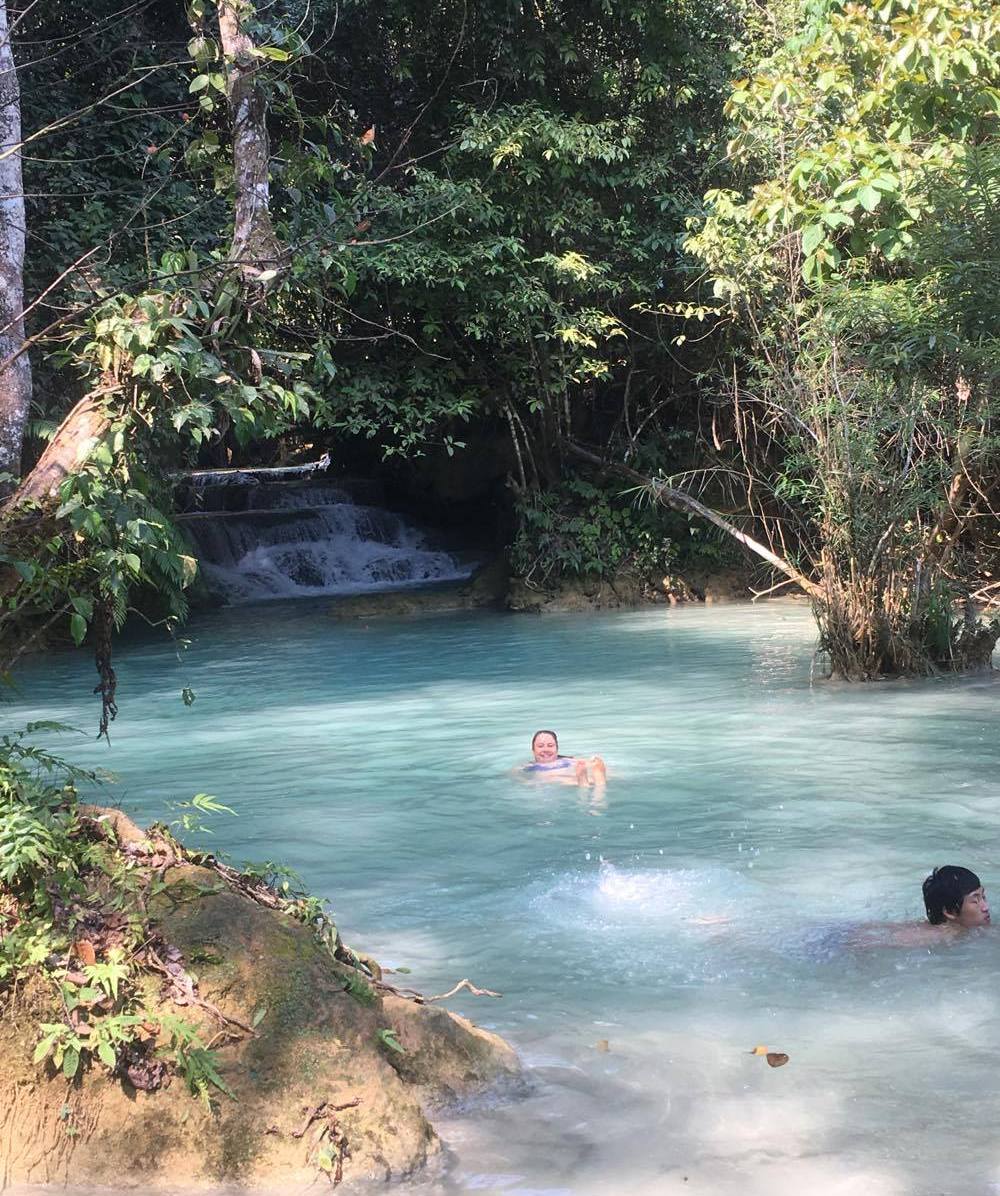 The main falls were magnificent. 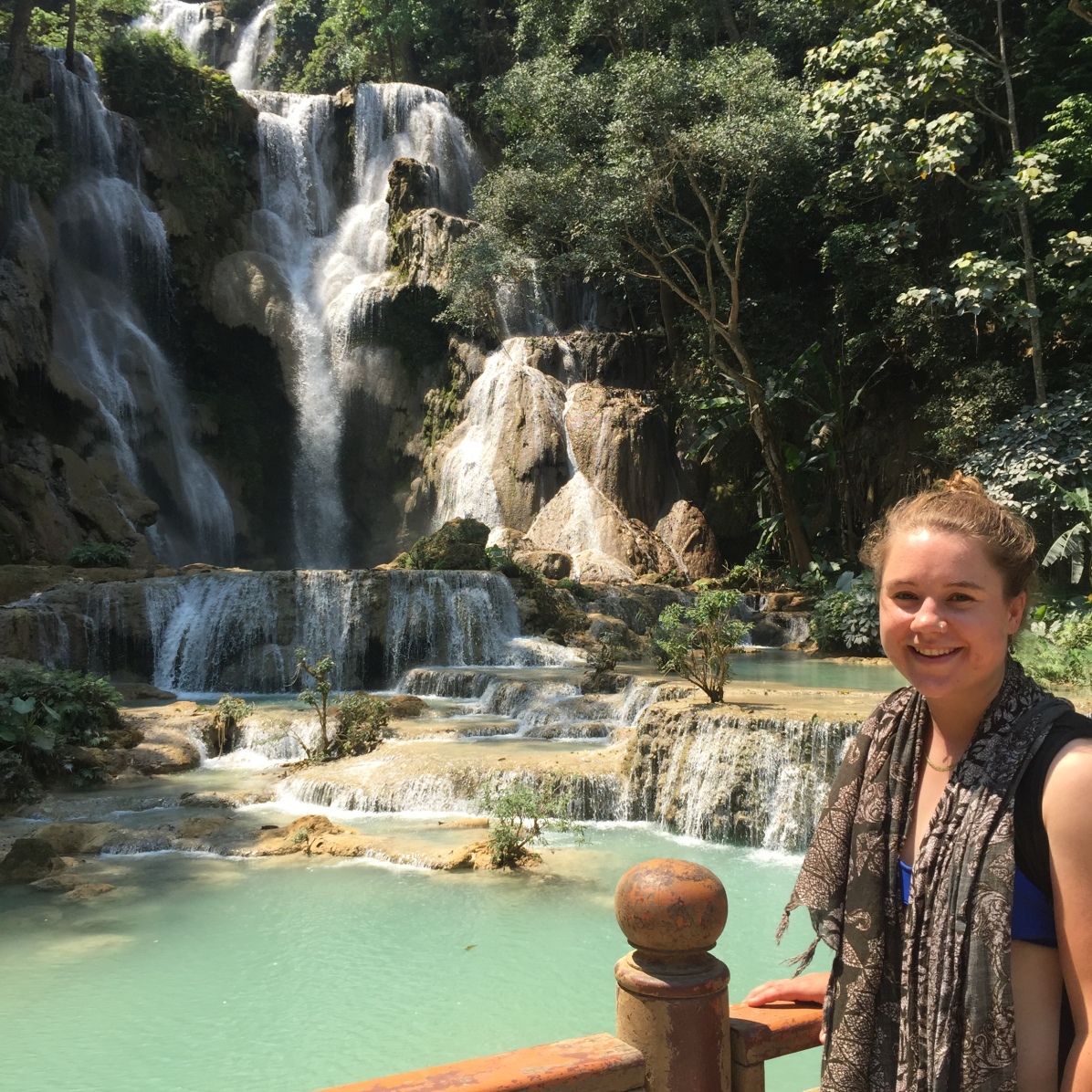 What was even cooler was you could hike/scramble up a steep path to the top and look out over the edge. 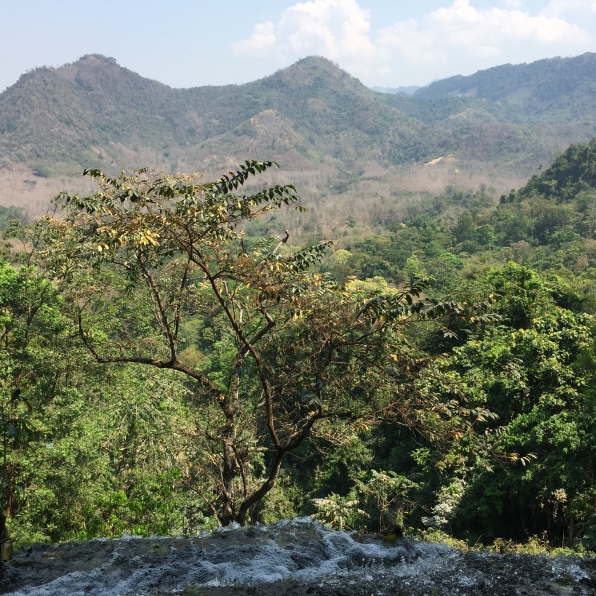 I left Sarah and Ella in the dust, sorry guys, because I was so energized by being around such awesome water energy.

At the top was a beautiful marsh area that was fed by a spring a 5km walk down a path Robert Frost would conjures up in his poetry.

Alas! I did not take that path for there was too little time but I would like to return and make it all the way to the spring. However, “as way leads on to way…” Shut it Frost I’m coming back!

We arrived back in Luang Prabang in time for a lunch at the visually stimulating buffets in the market. YUM.

(later this would cause some unpleasant stomach pains but it was worth it).

Us three girls bought ourselves imported cider from the local grocer (why she carried it is a mystery) and headed to the west bank of the Mekong to watch the sunset. 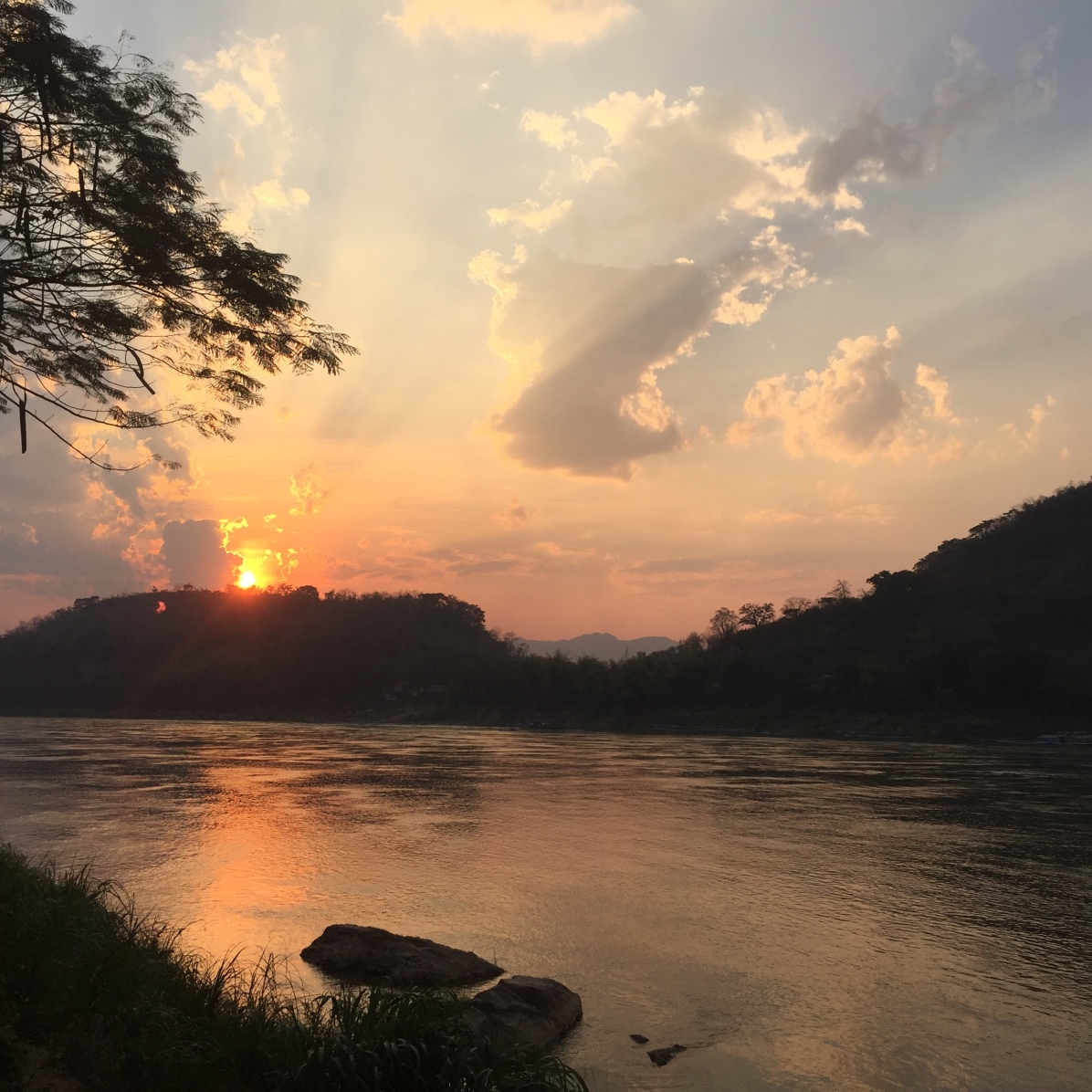 Beautiful. And the cider was tasty. I am going to have to find it in Chiang Mai.

Later that night we splurged on our dinner, meaning we spent over $2 (The Horror!), on the most delicious meal we had in Laos. It was a tasting platter of all of Laos most renown dishes as well as the local Luang Prabang specialties such as crispy Mekong river weed, the city’s own style of sausage, and dessert with black beans, coconut, and banana ( it was very good).

The last morning I split off from the girls and headed to the renown French bakery on the peninsula for a croissant, I had two, and an espresso. 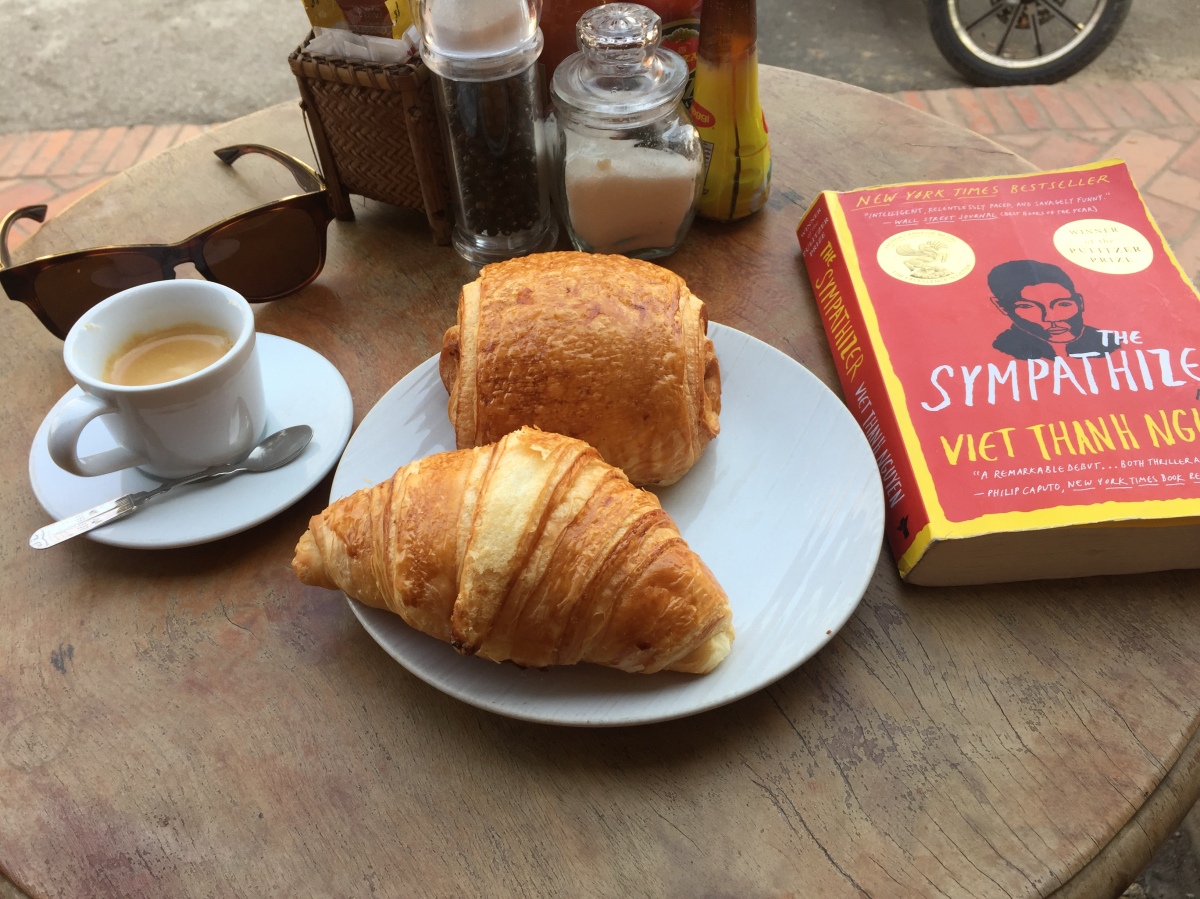 Of course, while I munched and sipped and dipped I was being watched over by the large golden Buddha across the street. 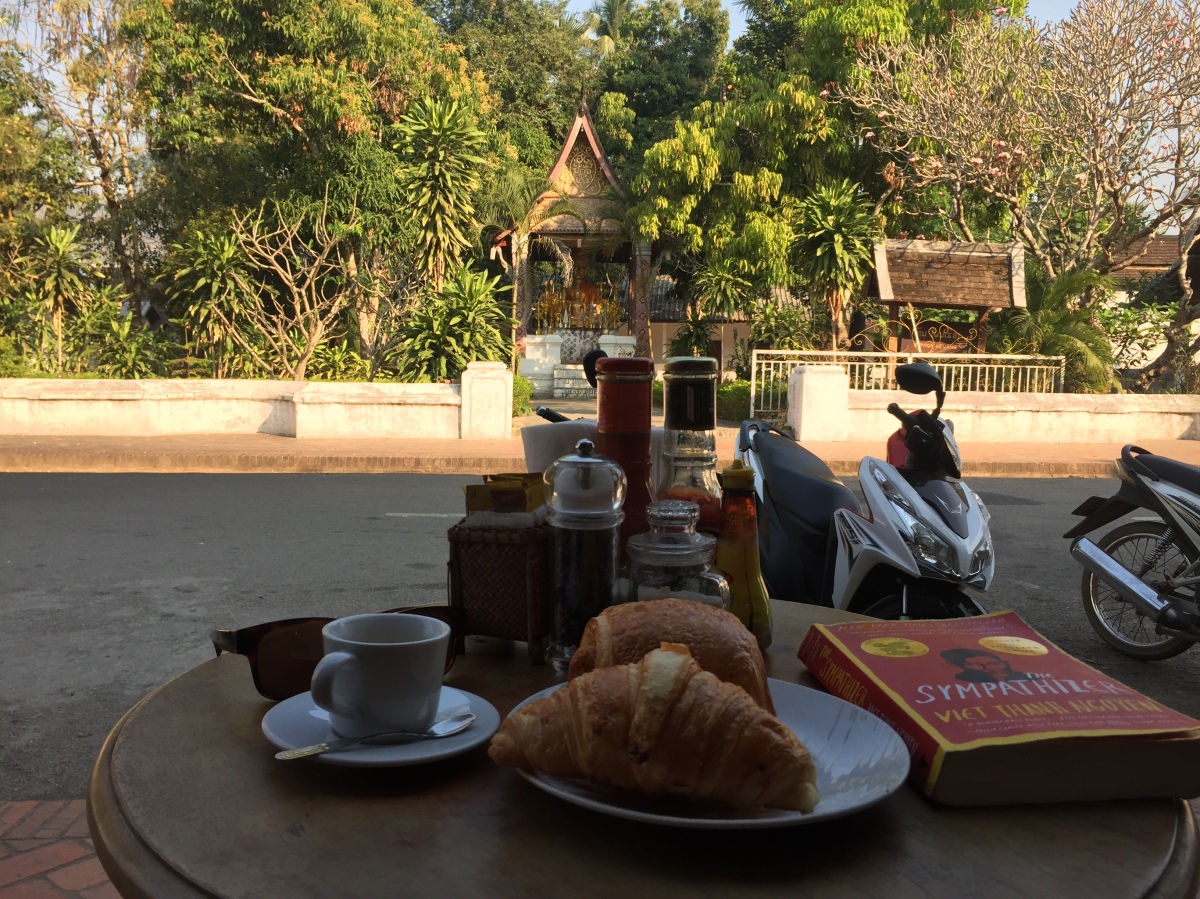 What a trip. I fell in love with this part of Laos. It was my style: adventurous, outdoors, culture, relaxed, tasty, good people.

I also did some solid shopping. The night market was fantastic and not as overwhelming as Chiang Mai’s. No one will know if what I got them is from Thailand or Laos unless I tell them:)